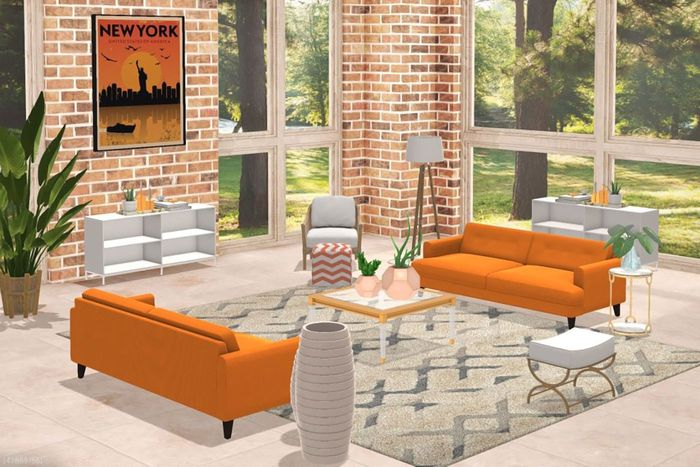 I am an adult, so naturally, I at least try to be responsible about money. At the end of each month, I review my recurring expenses, consider cutting back, and then change nothing. But in recent months, in addition to regular payments to Netflix, Hulu, Uber, Amazon, Big Avocado Toast, and my 401(k) (maybe? I think?), I’ve also begun spending a sizable chunk of change on the iPhone interior-decor game Design Home.

For the uninitiated, Design Home lets you design rooms, and then other players (seemingly entirely women, based on their avatars) vote on them, which affects your overall points score as a “designer.” As many have pointed out, it’s like the part of the Sims when you design houses, except the game uses furniture from real designers, and instead of just typing “rosebud” and getting unlimited money you have to pay for the furniture out of your CitiBank savings account labeled “ANNA DO NOT SPEND — FOR EMERGENCIES ONLY.”

I swear, I never thought I would be the kind of person who makes in-game purchases on a home-design app, and I’m still grappling with what that says about me. Since I started playing about a month ago I’d guess that I’ve spent about $50, which – considering the game’s prices — is kind of a remarkable show of restraint. For example: $1.99 of real-life money will get you about $3,000 of in-game cash. While that’s enough for some very basic furniture, a really dope designer sectional can cost as much as $10,000 in Design Home dollars. Do I feel a rush of shame every time I spend $1.99 of my real money so I can purchase a virtual tufted West Elm armoire to “style a modern bedroom for an art director’s penthouse in Portland, Oregon”? Of course I do. But I’m comforted by the fact that I’m not alone.

In summer 2017 the game was already extremely popular, averaging a million daily users, but within the last year it seems to have become a favorite among people I follow elsewhere online. Audrey Gelman, the founder of The Wing, told me that so far, she’s spent $50 on Design Home and is in a group text called “Design Home Homies,” created so she and her friends can send each other their best work. “Kathy Kuo haunts my dreams,” she added, referring to one of the real-life designers who sells a lot of furniture “in game.”

Each design project comes with a charming set-up — for instance “after graduating from college, this marine biologist was thrilled to find a job right here in the area” and she wants you to “design a coastal living room for her charming seaside home.” It also comes with specific stipulations — include “five coastal items,” for example, or “pair a modern Arhaus bed with a black metal desk.” Run low on funds, and you’ll find yourself unable to fulfill the challenge or else committing unforgivable aesthetic crimes, like pairing a red tartan rug with a tie-dye pouf, because that’s all you have in your inventory. End up in this situation and you’ll be met with a lowly 3.5 star rating and your own shame spiral.

I’m not exactly sure what it is about the game that keeps me coming back for more. Maybe it’s those bizarrely evocative little micro-fictions about the rooms that let me, just for a minute, inhabit another life where I can afford nice furniture and/or real-estate. Maybe it’s images of real furniture, which the game conveniently reminds you are actually available for purchase, to have delivered to your real home, which make me feel like I’m actually learning about design and might one day put my newfound love of quilted headboards to use. Mostly, I think it’s fact that the game play is a perfect mix of creativity and strategy, simultaneously meditative and dopamine-fueled. Each room is its own unique puzzle. You get to be creative, but only within constraints (financial, rule-based, and the fact that you can only place a table exactly where the game deems a table is needed).

Here’s a room I made earlier. It’s not perfect, but I needed two orange items and I could only afford one of the cheapest orange couches the game had without ponying up another $1.99 to the Game Gods, and I’d already splurged on a $4.99 top-up to get a Cynthia Rowley floral armchair set for my last room; so it was either use the weird geometric beige rug or spend 3,500 worth of diamonds (yes, there are two currencies, don’t ask) on more appropriate carpeting. You see? Sacrifices.